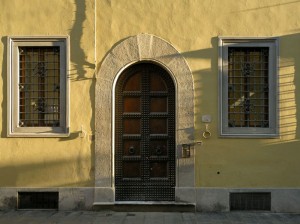 Palazzo Coppini is the historic seat of the Fondazione Romualdo Del Bianco® – Life Beyond Tourism®. The ancient Via del Giglio, on which it is situated and which dates back to at least the 14th century, links two of the city’s leading religious institutions, the Basilica of San Lorenzo and the Dominican convent of Santa Maria delle Vigne (later Santa Maria Novella).  The street follows the line of part of the city walls built by the Florentine Republic between 1173 and 1176.  This set of walls, however, the fifth in the city’s history, was only short-lived because the explosion in the population of Florence at the time – 14th century chroniclers tell us that the city then had a population of some 100,000 to 120,000 inhabitants – forced the Republic to order the construction of a new and far vaster circuit of walls enclosing some 520 hectares just over a century later (in 1286). Palazzo Coppini is unquestionably of particular interest because its structural and decorative elements reflect some of the most crucial periods in the city’s history before it expanded beyond its 13th century walls in the 19th century. First of all, the medieval era can be identified by a portion of a tower house whose top was one of several “lopped off” in 1250 in accordance with a decree issued by the “Government of the First People”, its remains being subsequently incorporated into a noble residence.  The palazzo was extended and restructured in the 16th century, two of the outstanding features from that period being a very beautiful helical stone staircase and an elegant fountain in a niche surmounted by a large mascherone typical of the Mannerist “Grotesque” style.  The 19th century saw a further enlargement of the palazzo involving a complete overhaul of the aristocratic family living quarters and redecoration in the neo-Gothic and neo-Renaissance styles popular between the late 19th and early 20th centuries. (official website)

ICLAB is a place of experimentation for young creatives, a space in which educational research and creativity are released. The project is sponsored by the Romualdo Del Bianco Foundation® and its International Institute Life Beyond Tourism®. ICLAB develops the experimental side of the mission that the Romualdo Del Bianco Foundation ® carries on from 1991 through an intensity of workshops and events for the dialogue between cultures. This space arises then to give his contribution to the development of human relations to promote knowledge of and respect for cultural diversity. (official website)

The Museum attached to the Opificio delle Pietre Dure, today a modern center specializing in the restoration, is a direct subsidiary of artistic manufacture and workmanship of precious stones, which was officially founded in 1588 by Ferdinando I de’ Medici. The most prestigious creations, frequently gift as part of the grand dukes of Florence, are preserved in palaces and museums throughout Europe, while in the laboratories of production remained unfinished works, or a result of changes and subsequent disassembly, and what has survived the loss XIX century, which came to an end in 1882 with a museum collection. This, which includes specimens of great beauty and refinement, it is sufficient to outline a historical path of craftsmanship which unfolds over three centuries. It also remains an important reserve of ancient marbles and semiprecious stones collected depending on the inlay technique. (official website)

*Places to be booked at the registration desk. 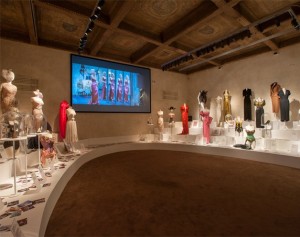 The Salvatore Ferragamo Museum is an exhibition space dedicated to the history and activities of the International shoe-designer Salvatore Ferragamo. Opened in 1995, the museum is housed in the historic headquarters of the medieval Palazzo Spini Ferroni in Florence. The goal of the museum is to document the important creative work of Salvatore Ferragamo in the field of leather goods and footwear and in particular to demonstrate the relationship that always exists between the business, art, design and costume. Expanded in 2006, today the museum occupies the basement of the building. It consists of seven rooms: the first two rooms are devoted to the history of the house Ferragamo and his creativity are exhibited in the biennial exhibitions – rolling – over 14,000 models kept in the museum. The other rooms of the museum are intended for temporary exhibitions such as the tribute to Marilyn Monroe  in 2012-2013 for the fifty years after his death: the Florentine designer created just for her models ‘decollete’ Stilettos , of many colors and materials. The footwear collection, which uses the museum documents the entire span of activities of Salvatore Ferragamo, since his return to Italy in 1927 until 1960, the year of death, highlighting the technical ability and artistic Savior, who through the choice of colors, the imagination of the models and the testing of materials was able to make a major contribution to the development and success of the “Made in Italy”. (official website) 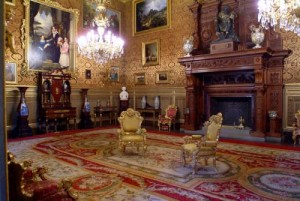 The museum was created by Frederick Stibbert (1838-1906). His father was Inglese, English His Mother. Frederick was born in Florence but was sent to England, as a young boy, to study. His father, Thomas, was a colonel of the Coldstream Guards, and his grandfather Giles Had Been Governor of Bengal, India. Giles accumulated an incredible fortune Which passed on to Frederick When he was 21 years old. He started to collect time immediately upon His coming of age and ended up transforming His house in a real museum “Which Has cost me a great deal of money and much care and effort”, as he wrote on His will. When Frederick died he left the museum to the municipality of Florence, to Improve the knowledge of history for the benefit of future generations. Today the museum is a Foundation according to Functional Stibbert’s last will. Frederick Stibbert began his collection of arms and armour as soon as he came of age and returned from his study period in England. His interest covered also costumes, paintings, tapestries, furniture and other applied arts. The museum includes archaeological items, music instruments, liturgical objects. Today the collection amounts to 36.000 inventory numbers for about 50.000 items. Greatest part of them are on display and only a few are later additions and donations. (official website) 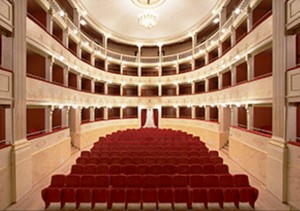 In the city of Castelfiorentino the relationship with the language of the theater has a tradition, that has lasted through the centuries, which has seen for a long time right in the People’s Theatre the reference point, the place of processing and the representation of ideal and material. Since the inauguration in 1867, there have been many events of this cultural structure where you are not only materialized passion for music, opera, prose. The People’s Theatre in fact, it can really be considered as the mirror in which is reflected the image of the fundamental elements of the culture and recent history of Castelfiorentino, the place that made ​​it more “civilized” the entire community. If it is true, as he wrote Antonio Paolucci, an honorary citizen of Castelfiorentino, this community “is proud of its history and is aware that there is no future without memory,” the complete restoration, the “rebirth” of the People’s Theatre – the only nineteenth-century theater of the Empoli Val d’Elsa countryside, – it is also an opportunity to reflect on the future, to make a point of reference for the development of new generations. (official website) 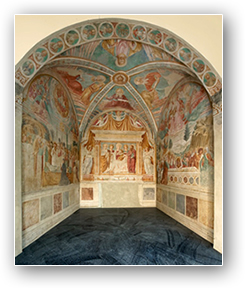 BEGO-Benozzo Gozzoli Museum, is a museum located in Castelfiorentino, in the province of Florence. Opened Friday, January 30, 2009, contains frescoes and sinopias of two monumental shrines that Benozzo Gozzoli frescoed in the municipality of Castelfiorentino in 1484 (Tabernacle of the Madonna of the Cough) and in 1491 (the Tabernacle of the Visitation). The two monumental shrines were in a precarious state of conservation already in the nineteenth century: in 1853 he was leaning against a neo-Gothic facade on the Tabernacle of the Madonna of the Cough, turning it into a small oratory in order to protect the frescoes from the weather; Also in 1872, the Tabernacle of the Visitation was encased in a small building with the same function. Despite the construction of the two buildings around the tabernacle, between the sixties and seventies of the twentieth century, given the precarious state of conservation of the frescoes, it was decided to make the tearing of the painted surfaces, perform a restoration and place them temporarily in a local the Public Library of Vallesiana, located in the city of Castelfiorentino, taking the name of the Municipal Art Collection. Here they remained until the construction and opening of the new museum took place in January 2009. (official website)

Villa Pucci is located in Granaiolo, a town belonging to the city of Castelfiorentino (FI). It was built between the XVII and XVIII century by the Pucci family, in the typical style of the traditional Tuscan country: a simple facade with windows framed by stone that stands out on the white plaster. From the central part of the facade a kind of tower rises with a lovely panoramic loggia. The building was badly damaged during the Second World War, but after a careful restoration has been reported to the ancient forms. The park was renovated in the 70s by famous Italian architect Gae Aulenti, and it is a good model of how a modern intervention can be inserted in the context of an historic estate. In place of the late Italian garden, which dates back to a reconstruction of the early twentieth century, was carried out a series of steps to lawn, bounded by curb sandstone, which follow the topography of the land. On the back it has been built an English style landscape garden with large areas of flowering. The Pucci Archive and Talent Center is a real training center , which Laudomia Pucci, Emilio Pucci,’s daughter really wanted to show to the new generations of students of fashion, the know-how that has always distinguished the intense activity of the brand from its origins to today.